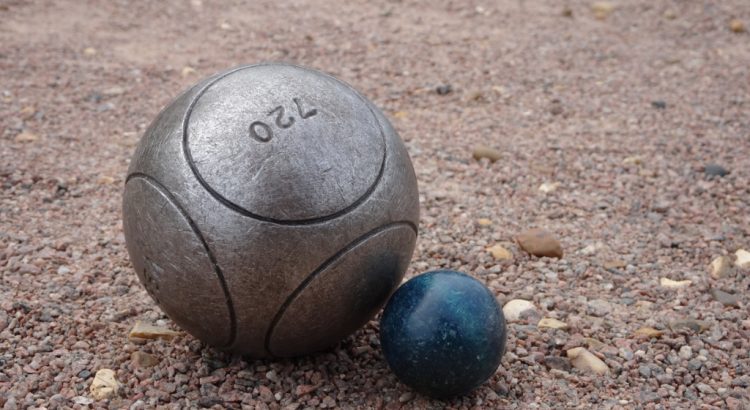 Petanque is sometimes referred to as “French Boules”. The object of the game is to get your boules closer to the small wooden coche (more properly cochonet) than your opponent(s). There is no gender distinction within the game, men and women (and anyone else, come to that) play as equals.

Petanque is played in 3 formats – singles, doubles and triples.
In singles and doubles, each player has 3 boules, while in triples each player has 2.
The side whose boule is nearest to the coche wins the end and gain a point for each of their boules that is nearer to the coche than their opponents’ nearest.  Matches are played to 13 points.

For formal play, we use “Match” boules, which are metal (and clearly stamped “MATCH”).  These come in various sizes and weights. The size range is from a minimum of 70.5mm to a maximum of max 80 mm, while the weight must be between 650 and 800 gm.
Boules can be purchased with various styles of decoration, including various styles of customised features.  A decent set will cost upwards of £75, and can be purchased on-line.

Petanque can be played on any surface with a minimum formal dimension of 12m by 3m.