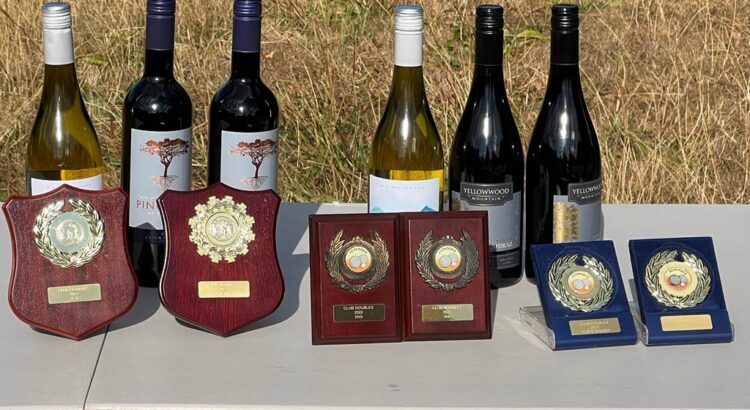 Our Club Doubles competition, which was postponed in July because of the Heat Warnings at the time, was played on Saturday August 20th.

Cecily was unfortunately not well enough to partner Frank, but he was kind enough to hang about in case another pair had a problem and took the opportunity to take some action photos – some even from the roof of the club house.

That left 8 pairs to play in the event, which took the form of a 3 match round robin, in 2 groups, after which we had a seeding order. The afternoon took the form of a knockout competition, with the best performing pair in each group playing against the worst performing pair in the opposite group, and 2nd v 3rd. The winners of these matches qualified for the Trophy semi-finals, while the losers went into the Plate semi-finals.

The Trophy final was played between David Randall & Ash Patel and Steve Fort & Richard Scrimshaw, which was a repeat of their 2nd match in the group phase. The 1st time, Steve & Richard had, ahem, failed to score, despite claiming to have played better than that sounds; in the final, however, they did score … 1 point. So David & Ash picked up another trophy, and the Grand Prix is now a straight fight between the pair of them.

Here are some photos of the event – shots of play by Frank Arnold, the prize giving shots by Robin Reid.